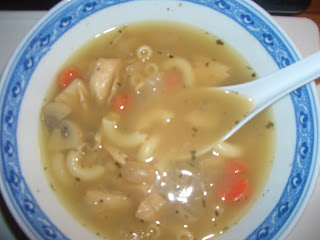 As I have commented before, soup is an art. Today's soup was again constructed with the broth from a stripped huli huli chicken, heavily seasoned with ginger and garlic, a few days ago. Well, a week ago, really. I added a can of Swanson's chicken broth for volume, and then the Wizard said,"There's a container of frozen vegetable and pork broth in the freezer you can use."
Pork broth? Who makes pork broth? What is pork broth? I have never seen a recipe that calls for pork broth.
The Wizard frequently cooks vegetables -- strange combinations like cabbage and beets -- with a piece or two of sliced pork loin (cut for tonkatsu) laid on top, in a clever electric steamer that collects broth in the bottom. Hence, vegetable and pork broth.
I added the frozen block of broth, nicely tinted red from the beets, to the soup, with carrots, mushrooms, a can of cannellini beans and some macaroni, and a can of canned chicken, to complete a sort of Italian/Chinese concoction what with the ginger and a flourish of Italian seasoning, and it was delicious.
I suppose I could get very Gourmet Magazine (except it's biting the dust) and create a recipe that calls for half a cup of pork broth. As for now, you can just enjoy my photo and figure it out yourself.
Posted by baroness radon at 9:00 PM