After enduring the physical indignities of an overnight economy flight from HNL to PDX (which wasn't that economical, and far less entertaining and comfortable than any Chinese train) we arrived in Portland (Oregon) for an exercise in filial piety for a weekend, in this case, the elders traveling to visit the younger generation. The night flight was annoying because they kept the big TV screen on the entire flight, flickering and flashing at 3 a.m. (And I couldn't find my eyeshade.) Do people need this CONSTANT "entertainment"?  Everyone who wasn't asleep was trying to be.  I declined the stupid movie in favor of my iPOD (shuffling Bob Dylan for hours) but at one point woke up to a frantic video about traveling in China.  Still listening to Bob, and pretty certain I wasn't dreaming, I narrated the travelogue to myself.  The sights I hadn't seen, I am familiar enough with to know about them. I drifted back to sleep only to wake an hour later to see an American Idol sort of competition about dog grooming. This time I wish I had been dreaming.

Portland is cold, wet, and misty in contrast to the hot, wet and misty we left in Honolulu.  The long weekend begins with proof that weather reporting is not always inaccurate.  As predicted, it is 44 degrees F, with light rain, and nippy (not a term I am accustomed to seeing in weather reports). It is not comforting to know that this is the extended forecast.

To fortify ourselves against the weather, after changing from light Aloha wear to jeans and fleece jackets and socks, looking quite local in a Northwest sort of way, we have a cozy pub lunch with some fine microbrewed beer, then drive downtown to wander about.

We try the mass transit:  within a certain "Fareless" zone, it is free. 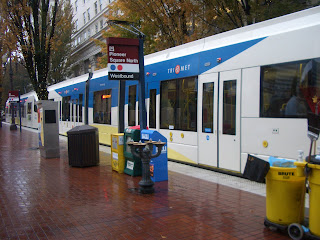 Why Can't Honolulu Do This?

The weather conditions, which were frightening when landing at the airport, with a ceiling of about 100 feet, make it impossible to tell what time it is all day. 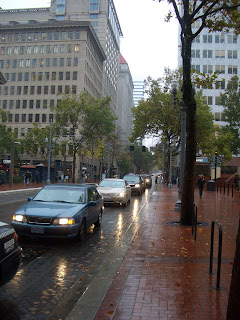 Always Time for Lights On

Still the walkabout is beautiful, a yin contrast to the sunny yang of Hawaii, and offers views of what my Chinese painting  teacher described as ku shu, that is, dying trees. 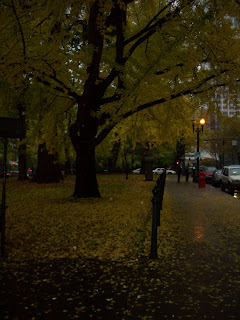 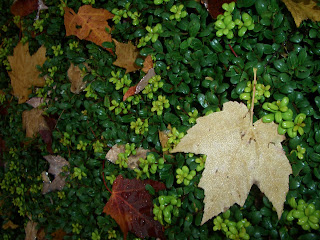 They will inspire me to paint when I get home.

Our main downtown destination was Powell's, the city's famed used/new bookstore that occupies four floors of an entire city block.  It is like a vast library where you can buy the books.

I found several old texts on Chinese painting to supplement Lao Shi's lessons, which are great and generous, but sometimes difficult because of the non-linear teaching style with slightly tortured English expression, not at all unlike the lessons I enjoyed on the Tao in Wudang. 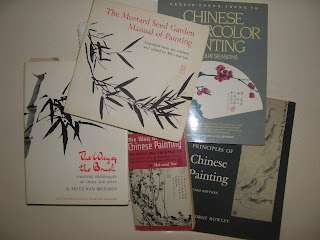 These texts--with classic references going back to the 17th century, not Walter Foster guides-- support the teachings, rooted in the Tao, in this case, the way of painting.  They discuss painting not in Western terms of critical interpretation, but its place in the whole culture, and the ideals and standards of the traditional techniques.  The skills are not easily acquired, and come no more naturally to the Chinese --or at least Chinese not raised in a traditional culture-- than Mandarin or Cantonese comes naturally to a second or third generation Chinese person raised in the West.  So while you can't learn the painting (or language or qigong or Chinese philosophy) just by reading the books -- you truly need a culturally connected sifu, a lao shi-- the books do reinforce the lessons, just as Taoist scriptures like the Tao Te Ching reinforce internal cultivation of the spirit.

At Powell's, once I exhausted the Chinese painting section, I moved on to Asian philosophy where, to complement Thomas Cleary's version,  I found a copy of Richard Wilhelm's translation of The Secret of the Golden Flower, (which was part of what we were learning in Wudang) and a miniature of Stephen Mitchell's Tao Te Ching translation. I enjoy his reading of the TTC on a CD I have, but I will like to have the written version as well (not really being one to "listen to a book" like my friend who wants me to do Chinese painting with a pen pad).  The Stephen Mitchell versions include no commentaries to speak of, but his voice and elegant translations stand quite nicely on their own.  I much prefer these to the latter-day self-help styled versions, like Dr. Wayne Dyer's "Do the Tao" set. I recently have been reading Arthur Waley, The Way and Its Power, which has a lot of good historical information.  And John Blofeld, who joins a group of immortals including those other China Hands like Graham Peck and David Kidd. They have great connections with the past to enhance our understanding of the present.

We are modern people, but to fully understand traditions, I believe we need to explore the sources as close to the beginning as possible and honor the scholarship that has already been done, before proclaiming we understand any of these ancient techniques.

Posted by baroness radon at 7:05 PM

Ku shu!
I love fall and ku shu.
Yay! I learned something today!
(And love the pictures!)