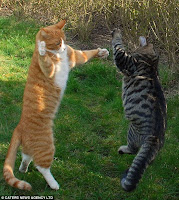 It is said that taijichuan was created by Zhang San Feng after observing a crane and a snake fighting. But the natural world must be full of martial arts inspirations. Cats practice regularly: Mini Tiger Fist! (Do check out the comments in this link.) Although they are natural fighters, they hone their skills good naturedly with each other, just like human martial artists. (Please indulge here my ongoing attempt to make Vincent Zhao/Chiu Man Cheuk a popular household god.) My home has been a feline martial arts studio for years. The late Mao O'wau, (below) and Mao Xiao Xin, a huge silver tabby, both neutered males, sparred in a sunny corner of my study every morning. Although sometimes it sounded vicious, blood was never drawn, and afterward they sprawled out together to nap in the sun. Very often the smaller O'wau took down the larger (oddly named) Xiao Xin with his more agile footwork and stance, the way smaller sumo wrestlers can topple much larger guys. 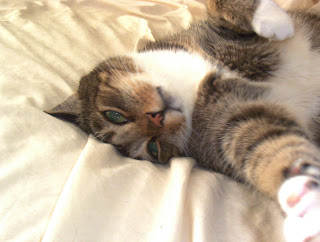 My current domestic cats, Fifi the Demure, and Lao Hu, the Yellow Emperor, don't practice together. My impression is when the male and female fight, it is serious (although I think Fifi taunts Lao Hu). Generally when he approaches her to play, she lays back ears, growls and hisses until he slinks away, trying to lose as little face as possible. We sometimes can entice them to hunt cooperatively with the laser pointer; Fifi is a pouncer (good technique for mice and geckos), Lao Hu is a chaser (good for rabbits and antelope). They clearly hand off the appropriate attack method depending on the behavior of the pointer.

So Lao Hu tries to engage me; when he was younger and more aggressive, he would shred my calves; now he attempts a kind of kitty wing chun with weapons retracted. I think I have to get him a student, a new young male kitten (Er Xiao Xin) to train.

Fifi actually bit me last week. I was brushing her dense coarse coat with one of those flat wire brushes; she loves it and demands the attention, but females sometimes exhibit a kind of electric attack moment in the midst of what appears to be orgasmic pleasure. Usually a sweet and affectionate cat who greets us with her fat belly exposed and feet flopping in the air, she drove all four fangs deep into my forearm. It hurt like hell for a week, but no infection set in. I was thinking of Sigfried and Roy; she didn't mean it, but I wouldn't want her around if she weighed 500 pounds. Or even 25. Well, maybe, but she certainly wouldn't get the regular grooming! 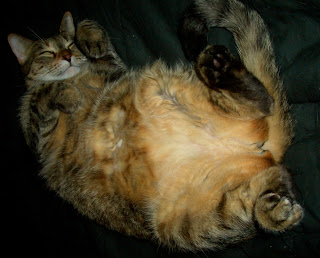 Fifi, Maybe Not So Demure
Posted by baroness radon at 9:48 AM