Much as I like the Three Deep Bears concept, it doesn't work as a pinyin-ization of my name.  Here's what it's supposed to look like (from a T-shirt, jersey not being necessarily the best material for fine calligraphy.) 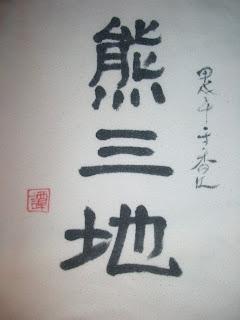 The Wizard had these characters carved into a chop (seal) for me many years ago.  You must admit it's pretty sexy. (The seal print reads right to left.) 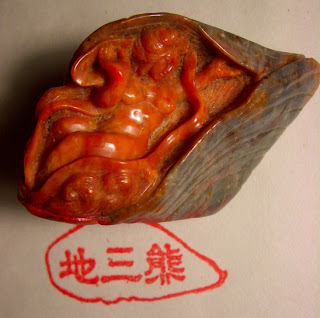 Here's the bottom, carved side up resting in its silk Chinese box.  Unfortunately in this picture, it looks kind of like an elaborately presented piece of meat.  A chop chop. 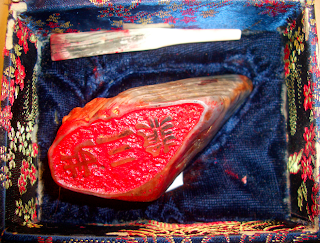 If you don't know exactly how this works, you press the chop into a tin of specially prepared inky red goo, like a stamp pad, and carefully imprint the paper.  My chop has a particularly nice feel in the hand. I have begun using it on some of my paintings. 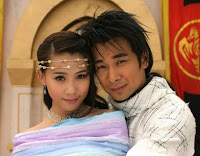 Since my seal is so unique, it could pretty much be my legal signature as long as I keep it locked up!  "But the will was changed!  It has her seal on it." And thus begins a wu xia fantasy extravaganza...starring Vincent Zhao...and me!  But wait...that woman...she stole my chop!!! Identity theft!

Posted by baroness radon at 6:48 PM