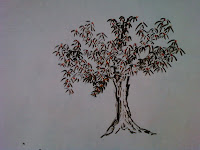 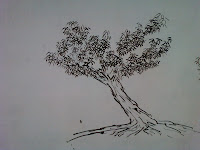 A few days ago a coworker was extolling the virtues of the new mini-Wacom pen pad, about the size of a trade paperback, that he just got for his MacBook Pro.  "You should use this for your Chinese painting," he said.  Untraditionally, I have occasionally made little doodle-sketches on my white board in the Chinese style while trying to think of a solution to some problem (only to eventually erase them the way Tibetan monks destroy their sand mandalas, to show their impermanence, or in my case, express an occasional fit of office pique.  Although the digital camera does give them a sort of immortality, seen here on the right.)


But the pen pad?  "Well, it's really all about the brush, the ink, the paper and the qi, " I explained.

"But you can express the qi with the pressure of the pen,"  he went on.  Still it just doesn't seem...traditional. 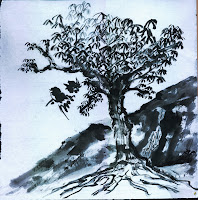 When contemplating one of the paintings I did last week at the Cultural Plaza, the Wizard said, "But why are those birds there?  They look out of place."  (They are the swashy things in the space to the left of the tree trunk. Big birds.)

They weren't mine, but were added by another of the painters at the demonstration, one of the reasons my teacher didn't want to participate. While she generally corrects our classwork by adding or enhancing some feature or stroke for teaching purposes, it did seem just a little bit rude to do it in public. And she too felt the birds were not only out of place, but out of proportion to the rest of the design.

So I enlisted my own pen pad, a much larger Wacom model, and did a little digital kung fu on the painting. Since they weren't  MY birds, I could vanish them . 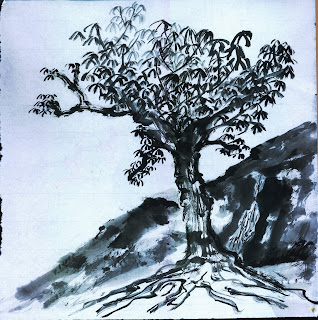 Makes a difference, don't you think?  Unfortunately,  the original work features the unerasable birds.  You can't use white-out on a Chinese painting.

Today I did another piece, all by myself.  I will take the homework to class, and Lao Shi may correct it.  At least I know for certain she won't add gigantic birds. 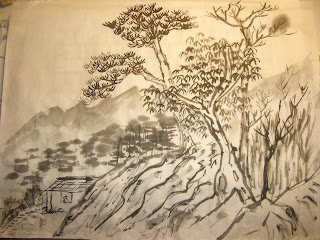 (There is no particular reason the paintings are of different color values.  Birds-no-birds was scanned; the mountain hut scene is a photo.  And the white board images are photos of your basic EXPO dry erase markers on a white board and live on only as digital images.)

Posted by baroness radon at 9:21 PM

I love your paintings, squishy birds placed there by someone else or no.
(But, yes - much better without the birds!)