Once Upon a Time In Chinatown

After reading from 365 Tao, my morning habit, and then rereading Carl Jung's Foreword and Richard Wilhelm's Introduction to the I Ching, the classic yellow cloth-bound volume I have consulted from time to time since 1967, (don't we all have one of those?--actually I have two, one defiled with notes and dates, and another, quite pristine) I made my way, somewhat philosophically set,  to Chinatown for an event suggested by my Chinese painting teacher.

I wasn't quite sure what was happening, except that it would involve painting demonstrations.  Having recently been to two other exhibitions bookending the moon festival and national day (both the PRC's, Oct. 1, and Taiwan's, Oct. 10), I was game for anything.  I arrived on time at the Cultural Plaza, not to be confused with the co-located Cultural Center, but no one was there except some people randomly setting up some tables, or possibly removing them.  I looked for Lao Shi, then ducked into my favorite video/bookstore, where I chatted with my new friend. "We haven't known each other so long, but we communicate well," she said, after we talked about obscure Hong Kong TV actors and the kinds of movies I like (and she likes to sell).

She thinks I should move away from the kung fu/wu xia I've been buying from her, and watch some conventional drama.   I told her I got into Chinese films a long time ago with early drama directors like Zhang Yimou, Wong Kar Wai and Chen Kaige.  I used to bring home pre-US-release VCDs from Hong Kong. The kung fu is a recent preoccupation set off when looking for a particular Chinese film, I was directed by the clerk at Blockbuster from "Foreign Films" to "Martial Arts."  A whole new world, so to speak,  opened up for me!

She sold me another Raymond Lam TVB set, the curiously named "Twin of Brothers" (42 45-minute episodes) and a contemporary Taiwanese drama on DVD that cleverly comes with two audio CDs of the soundtrack music as well.  What a great concept!

I returned to the Plaza, and Lao Shi found me.  She introduced me to some friends who explained that the event was a carnival (a hard word for Taiwanese to say) for the various Chinese schools in Honolulu, to encourage the young kids to learn traditional Chinese culture.  We had a nice chat about Chinese politics and the idea that the people of Taiwan (identified as "China's largest island" in a PRC-produced middle-school textbook I've been reading) would be happy to reunite...if they weren't FORCED to and could maintain democracy.  Uh huh. And I suppose the new entity could be called Greater Taiwan. (With perhaps a new national day, Oct. 5, a middle ground compromise?)  We agreed that time is all that is needed. With 5,000 years of dynastic drama, what's 50 or another 100?

Then Lao Shi, having connected with the group of painters who were doing demonstrations (although not choosing to do demos herself) said to me, "You want to [do] painting?"  (I'm not making fun here; her English is 10,000 times better than my Mandarin). Which led to ME demonstrating bamboo and simple landscapes to young Chinese.  "If I can do this, you can do this," I said to a puzzled young boy.  The fellow painters seemed to think my work was acceptable, and Lao Shi had been more than gracious in introducing me.  I suppose it was no more strange than a Norwegian teaching Cantonese in Hong Kong. 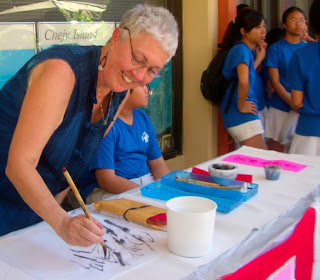 Then the older painter to my left, who seemed to like my landscape, and was surprised I'd only been studying since January, put my name on my painting in his beautiful calligraphy. 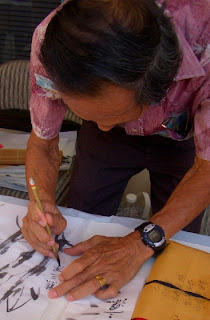 My Name (not really)

Lao Shi said I had courage to do this; I said I hoped I hadn't embarrassed her.  In all honesty, I felt my work that afternoon was not that good: the ink was too thin, the paper was poor quality, the day was too hot, I was using someone else's brush, under some pressure to perform.  Still...

Then we watched some young dancers and a nice little king fu demo by a young boy; the mirror opposite of the event two weeks ago featuring Mr. Iron Crotch. 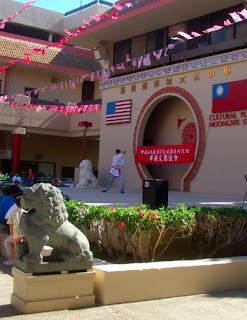 Loving all the pictures and posts I've missed! (My daughter loved the cats. :)
Your name is lovely. I want my name! Haha
Seriously - you need to post more of your paintings. I'd love to paint like that!

Happy to see you back, faithful reader!

Re: my Chinese name--The first two characters,from top, are xiong (bear, my maiden name is Baer=bear) and san (three) and the third is supposed to be di, (like world or earth) meaning my name "sounds like" bear of three worlds, or third world bear. But now that I look at it closely it's not the "di" I usually expect. Doing research now! Will update in another pst.

Glad your daughter is enjoying as well. Did she she the picture of my cat in the refrigerator over on my other "yin" blog?