A couple of common threads run through casual conversation in China, with tour guides and ordinary citizens: "China's 5,000 years of civilization," and the unforgivable and unforgettable indignity of the Opium Wars. Other topics in the recent memory of the last few decades of the fifth millennium include the Rape of Nanjing and "one of China's biggest islands, Taiwan" (the other Big Island is Hainan, being developed as the Hawaii of China). The invasive impropriety of the Yuan and the Qing dynasties seems to be assimilated by Han China, but has produced plenty of scholarly books and martial arts epics featuring Mongols and Manchus up against the indomitable Han.

But who's indignant now? In a yin/yang turning of tables, I read today that Sen. Chuck Schumer has a bee in his bonnet about China's sales of honey to the U.S., saying that China has (quite likely) avoided honey tariffs and is undermining U.S. producers (already suffering from widespread bee mortality and hive collapse) by shipping through third parties and calling the product something else (like malt sweetener or blended syrup). He wants the FDA to come up with a honey standard which will protect us from China "playing by its own rules to the detriment of everyone else." I wish I could take credit for the clever suggestion, offered in the comments section of this news item, that we need a "sting operation."

Here's something interesting: after China was sufficiently overcome by opium addiction, Bayer IG came up with a clever way to help. The cure for opium addiction was .... morphine. And after there were too many morphine addicts, Bayer began to market its own trademarked product to combat morphine addiction. No, it wasn't aspirin. It was heroin. You can learn about these interesting developments in Narcotic Culture in China.

Drug wars are old hat. Clearly we need a War on Honey. 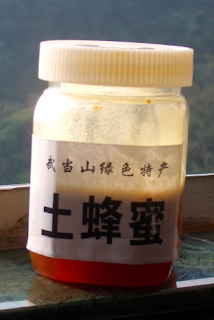 Wudang Amber '07
Funny thing. Three years ago, my first trip to Wudang, I was overcome by something respiratory on the mountain. Along with an armload of Chinese medicine (and Alka-Seltzer Plus, which really worked well), I was urged to use the local honey in tea or hot water. It was great. I tried to bring some home, but couldn't get it through airport security. I forgot it was a dangerous gel. In 2008, I returned with some, carefully packed in checked luggage. Chuck Schumer would probably think I was a smuggler.
Posted by baroness radon at 6:32 PM

So totally going to click on those links. Drug wars are fascinating stuff - especially when it's condoned by the government!

The book (Narcotic Culture in China) was quite interesting, possibly revisionist history, but isn't it always.