A lesson from travelling, especially in any kind of group exercise, is that the itinerary may not always be fixed and precise.  The best moments come from the unexpected detours, mishaps, changes of mind, illness, even minor scams and cheats.  If all itineraries were perfectly executed, why would you bother to make notes and take photos.

For our merry band of wannabe Taoists, there were plenty of unplanned moments.  We left Wudangshan--home for the middle week of our journey--on a bus, to travel by freeway for several hours back to Wuhan, where we would all split up to fly back to Beijing, Chengdu or Guilin.  Personally, I would have preferred the overnight train from Wudang to Beijing, but not everyone is an afficionado of the Chinese train. Another time, for me.  But once on our way, all practiced in the Eight Brocades, some recovering (including our Chinese guide) from a bout of apparent food-borne digestive upset, slightly stunned and mentally processing our recent mountain experience, we discovered the drive back to the big city would be even slower than planned.

First, we had to abandon the freeway...for at least two exits ahead in the Xiangfang area, the freeway was closed because of some big accident. We had to detour for about 60 miles on country roads.  I loved it.  No soporific mile after mile of trimmed shrubbery and long views across the idyllic countryside, we slowly passed through interior villages and towns, waving to real people in ordinary circumstances.  Our driver gave us the choice of waiting until the expressway was clear, or we could take the blue highways of China.  Stillness or movement?  We chose movement. 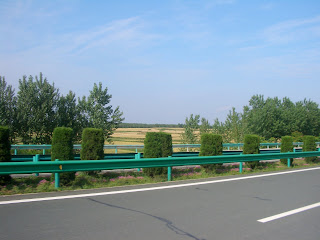 Who Trims These Miles of Shrubs? 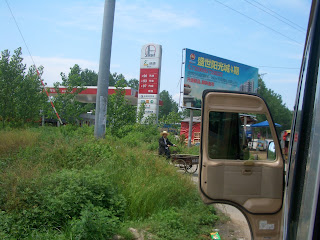 Leaving the Freeway
Back on the freeway,  we settled in to resume the quiet ride. Shortly,  I was awakened from a light doze by a sudden noise, directly under the wheel well over which I was perched.  A flat tire!  We limped along for a few kilometres on the remaining three rear wheels, to the next exit, where we found a mechanic at a dusty backroad garage who efficiently replaced the bus tire. It provided entertainment for the engineer of our group. (And in retrospect, I am wondering if it was ME.  The same Western butt that collapsed the hermit's stool sent some sort of wierd qi into the left rear tire?) 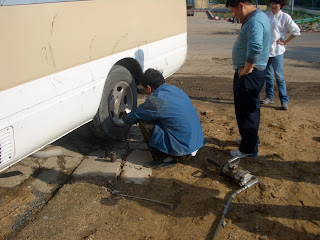 Not Exactly Jiffy Lube, but Fast
It gave us an opportunity to enjoy a local moment. Time was flowing like molasses, it was sunny/shiny, it was calm, no one had to be anywhere soon. I wanted to stay there. "I love this country," I said to someone. I bought a "Blue City" beer at a bodega: my ability to acquire yi ping pijiu in the countryside always makes me feel competent. (I float through China on beer and tea, both safe and satisfying.) Some people visited a gas station rest room but decided not to linger there; another of the party began to suffer a relapse of the queasy disease.  I spoke to some country folk, walking along the road, astonished to see us Westerners off the freeway, admired one of the local Little Emperors, using my limited Mandarin to play American (mei guo ren) diplomat.  (Every time I saw one of these children, and there were so many, all I could think was, "He owns us.") 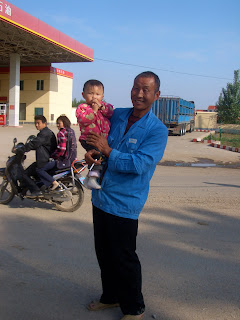 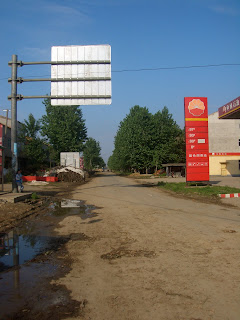 
On our way again, quite quickly really, the delay was only a half-hour--we had to stop one more time on the freeway.  Our gastrically challenged person was violently upchucking out the window. "Stop the bus now!" someone shouted.  While she regained some equilibrium, we looked around at an extraordinary view, for us anyway, enjoying it for a few minutes, rather than passing it by in a blur at 100 km/h.  None of these moments was on the planned itinerary.  And the best part, they didn't cost us an extra yuan. Well, except for my pijiu! 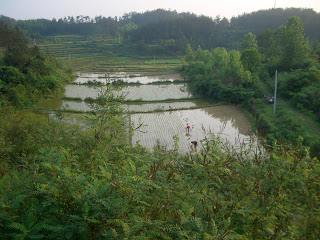 Paddies Along the Freeway
Posted by baroness radon at 12:53 PM

I can relate to this easily. I live about 70 miles from the nearest interstate. All the roads around here are what folks would call back roads - 2 lanes undivided. It's not ideal for getting places in a hurry, but why hurry?