Graham Peck's great book about mid-20th century, wartime China, "Two Kinds of Time" was perfectly named.  The concept still applies.  In a slowing rising fog of jet lag, my own observations are about some kind of time warp, the past and the future so weirdly mingled, it's hard to pin down the present.  And now it seems like a strange dream.  (Which my Tao teacher would assure me, it was.)

I used to have a few copies of an old Chinese propaganda journal, from around 1976, (which for some reason I left as a joke in a beach house in Avalon, New Jersey, and now I wish I still had them) called China Reconstructs.  It was also perfectly named, not only to express what was happening in "New China," Mao's China, but really, pretty much all of China's history, relentlessly reconstructing. As guides and citizens constantly remind you of China's "5,000 years of civilization," the two things you notice more than anything else in China are old things juxtaposed against construction materials.  Despite the efforts of the cultural revolution to do away with the feudal past, sometimes it's hard to tell the difference.  China is much tidier now (toilets having generally improved) than I recall in 1988, when much of the latest reconstruction under Deng Xiao Ping was ramping up, but the most central image of China for me now seems to be the old and new, playing off each other, like yin and yang.

Here in Shanghai, an old colonial, concession-era clock tower is overshadowed by a new innovative architectural marvel. China must provide architects with a free creative rein; most building in Honolulu, for instance, is restrained by budget. 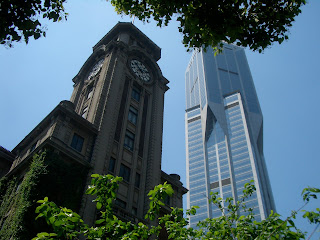 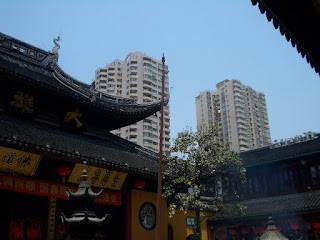 But contrast of old and new, small and large, is not just in contemporary building. It's everywhere in everything. Here, a well tended bonsai in a garden in Shanghai. 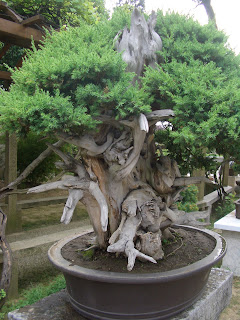 Ancient gnarly full-sized trees in the Confucius Temple in Beijing, yang to the yin bonsai. 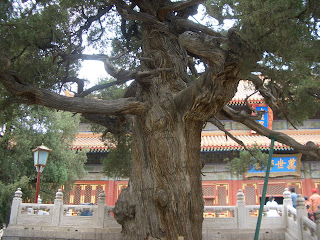 I enjoyed a classic Peking opera performance of scenes from White Snake, with which I have become very familiar because of Vincent Zhao's performance in Green Snake,  and thanks to the opera company who did it in Honolulu not long ago, in English. 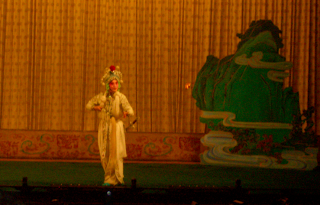 White Snake in Beijing
Later that evening,  I tuned in to CCTV to find one of Madame Mao's patriotic revolutionary operas on Chanel 11, which was completely devoted to Chinese opera (or there was some sort of marathon going on).  The opera sounded the same, the gestures were the same...only the costumes (and perhaps the plot) were different. 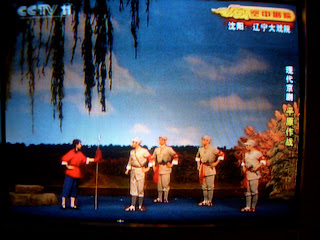 The heroes of the revolutionary opera were the ones made popular in China Reconstructs -- Iron Man Wang and Lei Feng and Liu Yingjun...heroes for the people.

No matter how much China reconstructs, there is an underlying tao to it all. I recognized CCTV's building under construction in 2007. 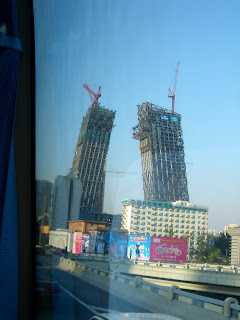 Now finished,  it is a centerpiece of the developing "civilized Chaoyang" district. 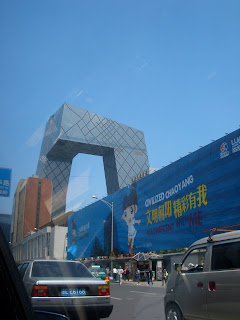 If I return to China in the next year or so, I doubt I will recognize the neighborhood.  The new will become old, something yet unconceived will rise higher.  I took a cab in Beijing to The Summer Palace, (where the Empress Dowager built her infamous marble boat) and I did manage to find a moment of peaceful respite from development and modernity.  That's why the Empress retreated there too, I think. 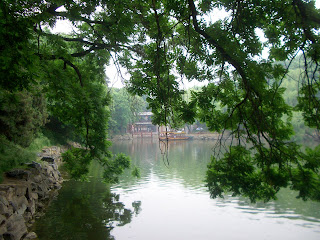 In 1988 to get to the Summer Palace, we rode bicycles on an unpaved country road along a canal that served duck farms.  I barely recognized the route this year; clogged freeways lined both sides of the canal, which ran through an area of high-rise residences and other city buildings.

But at least, after a visit to the "Temple of Timely Rains and Extensive Moisture" (not making this up) I found that some things may not change. 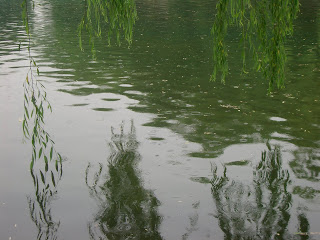 Rain, Water, Willows
While doing the links for this blog post,  I discovered that China Reconstructs is no longer called that: the new name of the journal is China Today.  And  China Tomorrow is coming on fast.
Posted by baroness radon at 9:04 PM

Life itself is a time warp! In each and every moment, each of us contains the old and the new. Me thinks it's a never-ending dance.

Absolutely. And I am not sitting it out!

Except from time to time, to meditate.