When I began to plan my latest journey to the west of more than a thousand miles, I decided to get to the gathering spot, Shanghai, ahead of the group, who would be assembling on the US West Coast.  I arrived a day early in Shanghai, and I had a plan: I wanted to spend some time at the Shanghai Museum to look at landscape paintings (not on the itinerary) and I wanted to discover the Bund, a juxtaposition to Hong Kong harbor, all by myself.

Hong Kong and Shanghai, Siamese Twin Cities
Just as an aside, this ubiquitous advertising signage for an insurance company seemed to suggest that Hong Kong's Harbor (the part with a hill behind) and Shanghai's were contiguous, Shanghai's border somewhere just to the right of the IFC building, (the one that looks like a giant nosehair trimmer, in the middle, upward and left from the second character from the right).  The real meaning of the image of unity, I think, is to emphasize that Shanghai has buildings that are taller than Hong Kong's.

It made no sense for me to travel to China with the group anyway.  All flights from Hawaii go through Tokyo, Seoul, or Taipei.  (Or Guam, a choice I made once because the Continental flight was so cheap, including a 24-hour layover there. DO NOT EVER DO THIS.  GUAM SUCKS.) There was no reason for me to fly east to join the group on the West Coast. I suspect when I plan my next China trip from HNL (and I am already thinking of it), the very next day after I book a ticket, a direct flight to Beijing or Shanghai will become available; there is constant talk of this in the local airline biz, but as for now, one must connect.

I traveled on the very agreeable JAL through Narita, then to Shanghai where on arrival I needed to get myself to the obscure Starway Jiaxin Hotel, in a local neighborhood near Lu Xun's Former Residence, and the Hongkou sports stadium. It was cheap. But comfortable. And really, very local.

I commented to my cabbie on the way from Pudong, "Shanghai shi da!!!"  (Shanghai is big.)  Shanghai is to Hong Kong what Hong Kong is to Honolulu.  (I should Photo-Shop an image of Diamond Head into the billboard.) 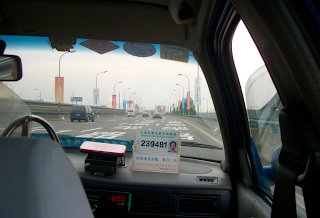 I arrived at the hotel, easily, but confused. The hotel's name was the Star Jiaxin.  I looked for a star. (Once in 1988 I did this successfully in the countryside outside of Beijing, looking for Five Star beer, distinguished only by five stars on the bottle cap.)  I went to enter the hotel, but the cabbie, said, "Bu, bu, bu," moving me to the left. The Starway was adjacent to a PLA communications center, also distinguished by a big red star. 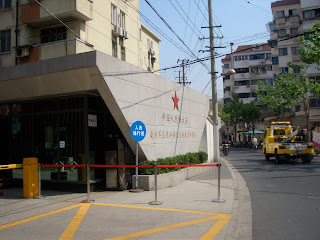 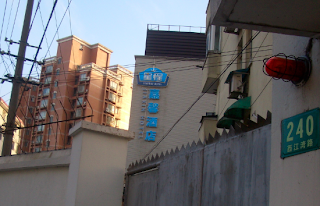 Starway Hotel
I had arrived.  It was a modest hotel, but with an attentive staff (not so stiff as the PLA guys next door) and internet access in the lobby.  The view was nothing special, and reminded me of a low-budget hotel I stayed in in Xian a year and a half ago.  In the morning, from my window, I watched people going to work, buying fruit from a cart.  This was not a tourist area.  The hotel had a decent restaurant with a Chinese breakfast buffet.  I partook of congee and dumplings before I pushed myself to the subway to go to the museum and the Bund. 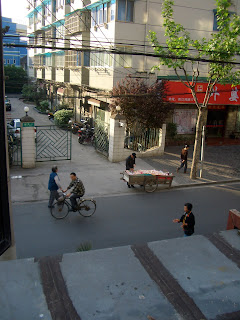 Morning on the Street
I had a moment of thinking I might just sleep all day in the room, waiting for the group,  and then reminded myself that I came to Shanghai early to do something on my own.  How different from the Hong Kong MTR could the Shanghai subway be?  Not that much really, maybe MORE Chinese, but with a map and armed with plenty of small change for automated ticket purchase, I found the entrance, not far from the hotel, and emerged (with a little local assistance) in the museum area.
Not quite ready to immerse myself in tea culture,  I found a little coffee bar, possibly in the old French concession,  hoping to get wifi acccess with my iPad. 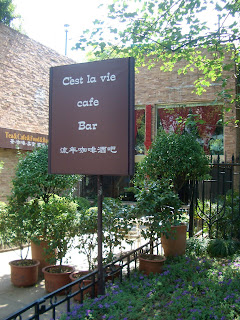 I enjoyed a latte, despite the fact that all coffee in China tastes like NesCafe. 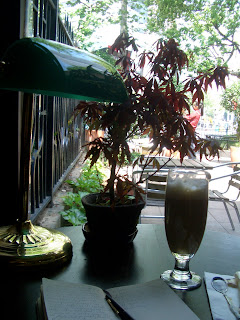 After orienting myself, so to speak, I went around the corner to the People's Park, where near the entrance, early Monday morning, I was met...accosted???...by a lovely young woman who asked me to take her picture. She was visiting her sister, she said, in Shanghai.  She said she was a kindergarten teacher.  We chatted about Shanghai, Hawaii, my trip plans, I told her I was going to the art museum.  Maybe I would like to join her at a tea house, she was on the way there?  Well, why not? 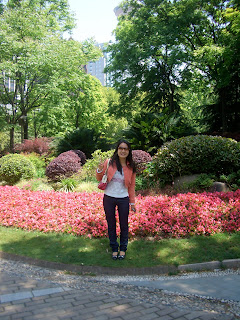 Her name, she said, was Xiao Xiao. She took me to the tea house, on the way helping me in a visit to  China Mobile where I unsuccessfully tried to get a micro-sim card for my iPad; she was charming, interesting, informative, and possibly a shill for the tea house.  I will never know.  It doesn't matter.  We spent a lovely two hours drinking tea, she interpreting the gong fu ceremony and translating the tea mistress's stories about tea. We both bought some tea (although I'm not sure it was the tea I actually ordered, have yet to open it).  After we were all tea'd out, and I shared my photos of my own Chinese paintings with her, she led me to the intersection where I could cross to visit the art museum.  She gave me her email address.  I'll never know if she was genuine or not.  I like to think she was.  And if she wasn't she certainly earned her commission. 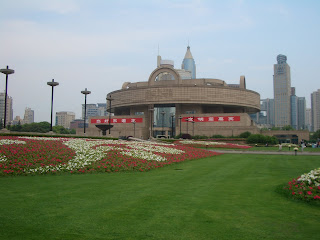 Shanghai  Museum
The Shanghai Museum is designed like a ding, an ancient vessel.  I spent two hours lingering over some extraordinary landscape paintings. It was special, to not be beholden to a group's movements.  I had all the time in my world.  One group of Ming paintings in particular,  by one Wang Lu, landscapes of Huashan, intrigued me.  A set of album leaves, they were like "Where's Waldo."  Among the fantastic landscapes,  one had to look really closely to find the little person lurking among the mountains.
Posted by baroness radon at 6:19 PM

I am loving all the updates (and reading them all!)! It sounds like such a good time!