Caught in a Web of Strategy Studies 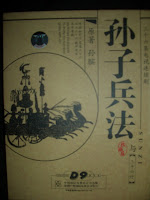 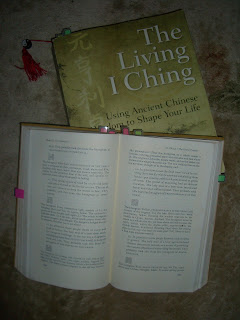 Deng and W/B
Anyone who is interested in Chinese history, philosophy and culture, and in particular, Taoism (religious or not), would do well to delve into Deng's book. The Zhouyi/I Ching is another piece of the Chinese puzzle, and continues to be of value and interest.
I had a hexagram cast and interpreted in the Man Mo Temple in Hong Kong a couple years ago. I do not remember which it was, but the reader, also considering my birthday, advised me I should take care of my health and that I should not retire until 2012. (Which is pretty much what I expected and planned anyway.) It was a fun sort of experience but I think I might recast a hexagram to update the advice.
Less profound is the Chinese fortune stick method: I did this once in a temple in Wudang where the expected payment was to be based on the kind of fortune you got. I had a mid-range fortune. (Yi kuai? Gou le ma?) An English-speaking tourist couple from Taiwan translated it for me. It was a lot like the advice I got from a doctor when I had a recent colonoscopy/endoscopy: just keep on doing what you're doing.
I have a stick-set of my own that I use with the Guan Yin poems; when I bought the sticks, the Honolulu Chinatown vendor asked, "Do you want real or party favor kind?" There is a 78-stick set which is employed as a game for parties; the "real" set, used in temples, has 100 sticks and is linked to I Ching-like oracular statements. I knew the 78-stick set was just a novelty, I had gotten one in Hong Kong. I wanted the real thing. On the vendor's direction, I went to the local Guan Yin Temple to buy the accompanying book of divination, oddly, a little more kitchy than Martin Palmer's.
A hexagram takes time to create and interpret; the sticks are fast-fortunes. Guess which one gives the better advice. 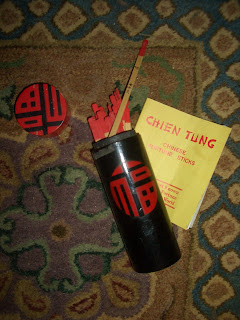 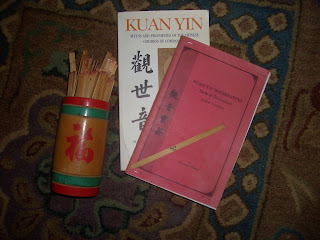 Smooth Sailing for Floor Scrubbing
Just for fun, I used both stick methods while I was taking these photos. My party game reading was #26, which basically said I shouldn't gamble today. I was actually asking if I should scrub the kitchen floor.
The "real" one, #50, was much more interesting. It was about smooth sailing.
I'm off to scrub the floor.
Posted by baroness radon at 7:31 AM