...is so hard. Because you want to hold on to the stuff, like a potentially good hand of cards. And you just never know. And also hard because it's dealing with sheer bulk. LPs, video tapes, boxes of board games. And no attic to put them in.
I'm moving some old LPs (some of which were left to me by my father, his recordings of Bunny Berrigan, Perez Prado, and other big band/swing trumpeters) to a space previously occupied by a collection of board games we never play anymore. The nostalgia factor is preventing me from being efficient. What to do with the board games?
I haven't played a board game in years. It's what you do when you have kids at home, (or maybe not, WII and Nintendo may have replaced this charming custom), but how do I discard the really old, depression-era version of Monopoly I remember using as a child? It's like a first edition with wooden houses and money printed on fragile delicate stock. (Never mind that I detest Monopoly; I always sell out early and consent to be an absentee banker.) On my set's instructions, there is a "Copyright 1936" notation. It is probably really valuable, even more than Park Place with hotels. 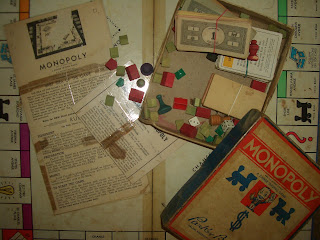 I don't know what happened to the Candy Land, Chutes and Ladders, and Uncle Wiggly games , but I find stored Parcheesi...Sorry!...Boggle...Clue...Scrabble...Yahztee...Uno...Milles Bornes.** Several Trivial Pursuit boxes of questions. And especially peculiar, a board game developed by the Credit Union National Associaton (CUNA), called Managing Your Money, a weird synthesis of Monopoly and Life. (My mother managed a credit union -- she should have been in much higher finance, she was really good, but there it is, some weird promotional item, but my son loved it when he was five years old. Buying insurance policies and calculating interest on loans. He did not absorb its lesson.) 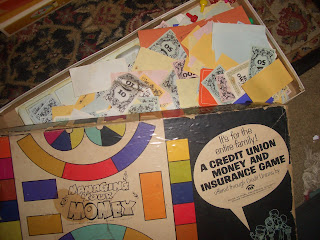 I remember playing all these games with friends, young and older. I think of the closet full of board games in The Royal Tenenbaums, (which only just occurs to me is a prequel to The Darjeeling Limited. That board game of associations, the mind.)
Two cribbage boards, a nice box of "ivory" dominoes and a mahjong set. I never ever played cribbage. Dominoes bored me, but I might like to learn mahjong. (I play computerized solitaire versions; I can recognize the pieces.) I think I'll keep that. One of my Chinese painting classmates can teach me; when she's not painting, she's playing. With great enthusiasm.
I played board games and dominoes at my paternal grandmother's house, at her kitchen table, with cousins, and later, gin rummy with my grandmother alone. I always had the seat with its back to the heat vent, so hot, which tended to bubble the paint on the chair. I liked to finger the squishy blisters of paint while waiting for my cousins' moves.
It's the bulk of stuff that is overwhelming. On the shelf above the board games are a lot of video tapes. (To say nothing of a lot of audio-book tapes about which I will say nothing.) Many self-made copies of MST3K from Comedy Central and lots of movies I don't want to get rid of (but probably available to stream on Netflix) and, some very weird "how-to" stuff:
The internet (and personal mastery) has--I hope--made all this pretty much obsolete so I intend to chuck all these into the trash. There was a time I would keep the tapes for recording over, but no more.
I am ready to offer to anyone who wants it, the Trivial Pursuit Canon, as well as all these classic literary knowledge games, but then, I look in the Scrabble box and discover the strangest thing: a rolled piece of Chinese calligraphy, what could it be? Where did it come from? I want to say it's beautiful but I'm not sure, I think it is not very well done, but I will leave it to my Chinese painting teacher to assess the quality and meaning. Some sort of Chinese Scrabble?

**Actually, I have played Milles Bornes fairly recently, not just because it has a French ambience. One of the most fun games to play with a few close, slightly drunk adult friends. A crazy road trip with cards.
Posted by baroness radon at 2:02 PM

Um, I think I would seriously love all the old games. I'd like to hang the boards as art!

I have a friend who had the most exquisite inlaid parquet wood parcheesi board I ever saw. I always wanted her to put it on a wall. Not sure she ever did.

If I had any wall space, I would take you up on your suggestion. Which is why it's hard to purge. Maybe, someday, a big wall...landscape paintings...monopoly boards...calligraphy. Album covers of old swing band trumpeters.

Why do't you come to Hawaii some time?

Holy cow, those games are gorgeous.

Don't throw them away. If you must part with them -- I hang on to stuff like that -- why not donate them to a local youth facility or senior center? Re the latter, I bet it would help some remember (or rekindle) their youth.

Seriously though, I feel your pain as I do try to not have stuff overwhelm me and my living space. And yet I have to admit to having pack rat tendencies... ;S