A Taoist and a Confucian...

walk into a bar and review their 42 years of marriage.
The Taoist is lighthearted because of an enforced (but not unwelcome) vacation from the office until the (Gregorian) new year. The Confucian is relieved because the various seasonal tasks of propriety (gifts for his office staff, many bottles of champagne distributed) have been completed.
Dinner is ordered after the usual martinis (the Taoist has taught the Confucian to appreciate what you can do with gin); the Confucian compliments the waitstaff for being the most attentive on the island. The ultra-attractive young Chinese server (at an Italian restaurant) says they try very hard because the owner yells at them a lot if they don't perform well. Later the owner reveals that the server is his son and in line to run the place.
The Confucian and the Taoist start serious reminiscing after putting a dent in a fine bottle of pinot grigio, recalling past dinners and bars in Vermont, Honolulu, Pittsburgh, Hong Kong, agreeing that the Hong Kong pubs were the best, with crazy characters and despite occasional rats and cockroaches, at least "back then."
The reminiscing moves on to, what else, Woodstock. The pair were "at" Woodstock, the same way Bob Dylan was: "in the vicinity," having turned it down "because of disgust of the hippies hanging around his house," probably very muddy. Married just a few months, the Taoist and the Confucian were driving (for a reason they can no longer remember) with the paternal parents through upstate New York to Vermont, observing all kinds of freaks on the road, picking up flyers and broadsheets advertising the Great Event of 1969.
"We'll drop you off if you want," the father said. The Taoist was intrigued, but the Confucian, proper even then, (not yet having replaced his Buddy Holly black frames with John Lennon granny glasses) said, observing the weather conditions, "I bet it will be really muddy."
"But," he recalls 41 years and four months later, "There are two guys I would like to have seen."
"Jimi Hendrix!" the Taoist says.
"Yes, and that white guy."
"That white guy? What white guy?"
It had been an evening of "that place, you know," and "those guys, you know," the old folks' shared ESP usually leading to an answer but then not quite sure in the end why it was being sought.
The Taoist, in a fit of eternal youth, whipped out her iPad. "Have you got yours working yet?"
"No."
A search on "white guy at woodstock" reveals some interesting links but no definitive answer. "Woodstock performers" does.
"Was it...Country Joe McDonald ...John Sebastian ...Tim Hardin ...Ravi Shankar (maybe not a white guy) ...Arlo Guthrie ...Joan Baez (definitely not a white guy)...Cleedence Crearwater (the Taoist is a little tipsy now) ...Janis Joplin ...Johnny Winter (a really white guy) ...The Who (who the Confucian and the Taoist had actually seen some time before)."
AHA! Joe Cocker; Day 3. "That's it!"
We, I mean the Taoist and the Confucian, would have had to be there for Day 3 and Day 4, to see Joe and Jimi, getting really muddy.
Leaving the restaurant, the Taoist pointed out the astonishing breathtaking full solstice sacred (to her, anyway) moon in the sky. Some passing Rasta guy, looking a little like Jimi, seemed to like the observation. The Confucian went to Safeway to pick up some things; the Taoist drove home listening to Bruce Springsteen singing "Glory Days," randomly shuffled, like an I Ching divination, on her iPod. (Bruce was not at Woodstock either; he was still in New Jersey, pretty much unheard of.)
On rising earlier this morning, the Taoist had actually cast an I Ching divination, first in many months, yielding hexagram 53, which is, uncannily, about marriage. It is called "Gradual Progress," and uses the image of a tree on a mountain.
The Taoist believes that the Glory Days are great to remember, but the tree is still growing. It's not over yet. The Confucian agrees, but doesn't really like to talk about it.
Weirdly, in the mailbox at home, the Taoist's free Rolling Stone magazine, which makes her feel old and young at the same time, has a photo of John Lennon on the cover. Old trees on mountains. 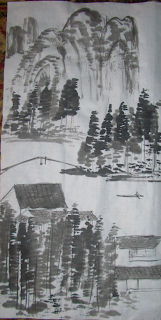 Posted by baroness radon at 8:22 PM

I was too young to attend Woodstock (age 11), but had I been old enough, I would have wanted to have been there when Crosby, Stills & Nash preformed. I don't think Neil Young had signed on yet.

THOSE white guys...
wow you read this even before I finished it!
Weird.

Actually, I detest Neil Young. I can't stand to hear him sing.

Although "After the Goldrush" is a lovely song.

I LOVE Neil Young!! Rock'n in the Free World is my anthem!

42 years of marriage... wow. What an achievement -- especially since, from what I gather, they've been 42 happy years. Congrats to you and the Confucian. :)

42 years of yin and yang, yes, you can say happy. Never think of it as achievement though, more like just being. Secrets of success: separate bathrooms, a dishwasher, and generally high tolerances for filth, clutter and randomness. And cats. Always have to have cats.

This is just lovely and perfect.
I would've loved Woodstock. Everyone. I mean, when you're tripping your butt off, everything sounds good.
But Hendrix would've been my favorite.
(And I LOVE Neil Young!)

Thanks Sybil.
The Confucian would not have liked tripping, figuratively or literally, in the mud. And Neil Young...I have to draw a line somewhere.
You can love him. But won't DG be jealous?