Like clockwork, the red Christmas cactus is blooming, actually a little early, if not as exuberantly as I hoped, though there's still time. (It has been known to blossom again at Easter.) I think it is still confused by a repotting. But still, there it is. 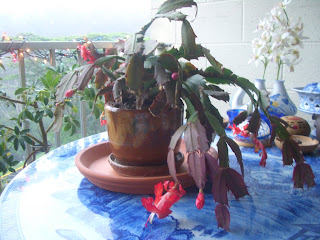 I thought nothing was happening with the undisturbed, healthier white one; it usually blooms later, but I looked closer and am assured of its promise: one tiny bud beginning to form. There will be more. 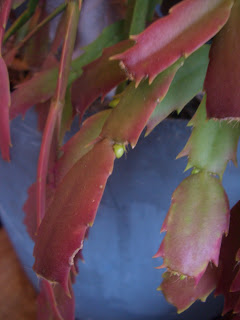 We have been having Hawaii Christmas weather. Rainy, cool nights. I woke up around 2:30 a.m. recently, shivering. It never occurred to me to turn off the fan and close the windows.
The rain obscures the usually vivid Waianae Range, so the horizon is pretty much limited to a stone's throw from my balcony/lanai. 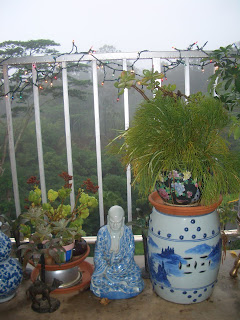 This is the kind of day, if I was going to work, I would say I just want to stay home. And today I can, enjoying the steady rainfall, the sound of the stream below, the apartment warmed by some holiday fairy lights (a tropical corollary to a fire in a Franklin stove).