Ho Chih Minh!
Wasn't he just adorable in 1961, in the picture on the previous post? Part of my collection of interesting looking Asian Communists, which also includes a couple of images of Zhou Enlai, who had an equally intriguing charisma to his look in the early days. 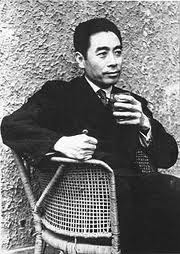 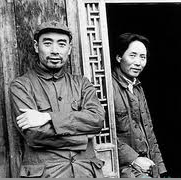 Zhou and Mao in Shensi in 1937***
I don't know what Ho, at a sprightly 71, and his buddies were doing at night in the Liang River in China, just before the Vietnam War started to heat up with our involvement, but if he was looking for a politically meaningful eclipse, perhaps he had better luck than with the one supposedly occurring right now above me. My eclipse is eclipsed by dense cloud cover, part of some serious rainy stormy weather pushed to the islands by some cyclone 1500 miles off to the west.
I hope I do better with tomorrow's Solstice full moon, which will mark our 42nd wedding anniversary. There's a lot of odd yin/yang stuff going in the heavens right now.
***I saw an exhibit once with this photo, reprinted huge, like 4 feet wide, which also includes a couple of other of the Red geezers like Zhu De and oddly, one of the Western hangers-on, I believe it was Owen Lattimore, I can't remember. Most images I see crop the Westerner out. But in poking around for information about these guys, and the Eighth Route Army I also learn that George Hogg, "English adventurer and local Chinese folkhero...stayed in the Shanxi 8th Route army for a time and also befriended general Nie Rongzhen." How curious this history is. George Hogg is the subject of the movie The Children of Huang Shi, about which I recently commented.
Posted by baroness radon at 8:09 PM

And neither one of those guys is Dave Grohl.
Haha
:P

Or Song Il-guk or Vincent Zhao. But now an intriguing movie concept: Zhou and Ho in China, starring the above. Never mind that one is Korean.

And a reminder that a strong marriage can withstand occasional crushes on primo masculine manifestations.

The Wizard has a thing for Paris Hilton and Victoria Beckham. Go figure.