Arrived home after the second session of my current Chinese painting class, which also includes language, calligraphy study, cultural education, and the revelation that at least two of the class members are mutual acquaintances through work associations. It's just like Facebook, but blood and bone, something like brick and mortar.
First task, sort the mail: charity solicitations from World Wildlife Fund (please save the tigers), the Sierra Club (please conserve the land), and Doctors Without Borders (please heal the sick), an envelope with Important Tax Information Enclosed, subscription offers to decline for Archeology Today and the Columbia Journalism Review, my Amazon delivery of the I Ching as interpreted by Hua-Ching Ni, and most distressing, diaries to record one week of my TV viewing to participate in a Nielsen ratings survey. (Do they think I'm going to watch the Superbowl?)
Apparently, buying a big new TV put us on a list somewhere: we want to know what THEY watch! Well, won't THEY be surprised? They sent three diaries, because I apparently revealed that there were three TVs in the household when I agreed to do this. (I'm happy to skew the study, and besides, they included a crisp new one dollar bill which makes a nice bookmark in the I Ching. Two more, and I can cast hexagrams with bills, not coins, some kind of inflation.) The former primary TV has since been recycled through the Salvation Army. I'm not sure the second one actually works, it's hidden in a little cabinet in the living room. No one watches TV in the living room (although sometimes I watch DVDs there on an old iMac G4, my obsolete but still somewhat useful manapua Mac, you know the one, it looks like a Luxor lamp crossed with a big cha siu bao, something that might have been a character in The Brave Little Toaster.
The third TV (now number one), in my former-closet-now-entertainment-center, will be the focus of this diary keeping. I did check to see if I can record viewing in 15-minute increments, like billable agency hours, because that's about all the news I can stand in the morning, pretty much the only time the unit has been used so far to access cable or broadcast. I've been using the nice big display for movies and Asian drama on DVDs, and hope soon to get the connecting cable to be able to run similar stuff from my laptop: streaming Netflix and dramafever.com. I don't think Nielsen is interested in that, although I see there is a nice space in the diaries for comments about my television habits. That'll be fun.
It seems like a strange way to start the new year, Year of Rabbit, the noisy welcome of which I enjoyed Saturday in Chinatown with a fine dim sum lunch, an exuberant lion and dragon dance parade, shopping for videos (for the numbah one TV) at my favorite Chinatown vendor, bargaining for some scroll landscapes with a cool old gentleman from Shanghai, and demonstrations of wushu and more lion dancing on the stage at the Chinese Cultural Plaza.
My personal attitude toward a new year, a new day even, is "don't look back." But maybe this guy just wasn't paying attention. Well, the dancing lion isn't on the World Wildlife Fund's endangered dangerous big cat list. (Although it is considered appropriate to pop some cash in his mouth.) 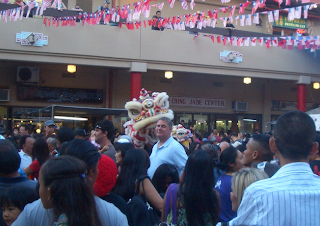 Look! Behind You!
Posted by baroness radon at 9:54 PM

I totally forgot what I was gonna say (freaking "jam" night here tonight and it is LOUD), but that picture is hysterical!