...will come down, eventually.
So today, I finally attack the chore of undoing the Solstice/Christmas sacrifice (in preparation for Year of Rabbit and Lent). What in early December was a pleasant task (even if I didn't quite throw myself wholeheartedly into it) now is just another tedious housekeeping job. (The lazy part of me just wants to torch the whole thing, but that would be so arsonistic, and I do love the ornaments, some of which are nearly personal antiques.) I AM glad I didn't put ALL the accumulated holiday crap on it. But in the end, we did get our money's worth out of the tree, to say nothing of considerable light and joy. Which is the point.
So I thought I was finished, poking around in the branches to make sure I didn't leave something sentimental behind, and there it is.
The pickle!
Tucked away in a hollow of the branches, a green glass dill, looking a little like a curiously diseased limp penis, that I bought maybe 20 years ago in "Germany" at Epcot Center, locus of world culture and commerce (by Disney). It was referenced to some legend (likely of the urban variety) that my Bavarian friend insists he never heard of --who would hang a pickle on a Christmas tree? And why? (Amanita mushrooms I get, but pickles?) I predict someday a Disney Christmas animation, to rival Polar Express, The Sour Legend of the Christmas Pickle. Or The Pickle vs. the Mushroom. A walking talking holiday pickle. Sounds obscene. As out of touch as I usually am, I suspect it has already been done. If not, I am conceiving a screenplay* and copyright for the concept. I had another one of these silly dills, probably acquired at Wal-Mart, given to me by my German/Druidish mother-in-law, but I passed it on (I think) to my son in a tradition-building sort of way.
Still, the dill has become an odd little element in my personal Christmas tradition and makes me recall the whirlwind Epcot ersatz trip to Germany, England (where I drank several pints of Bass), Morocco (where I ate a nice couscous), Canada, China (where I bought some tea), France, and the Global Future (where I got kinda sick on some crazy ride--shouldn't have drunk all the Bass followed by the couscous). I see Epcot "Theme Park" continues as a perpetual Disneyfied world's fair.
But wait...undoing the tree, I'm wrong, I'm not finished...I find yet another ornament tucked away, a hippie-style love bug****, another German artifact, more or less. The Volkswagen done up in a transformed tradition. (I never had a Volkswagen, not my style really, British roadsters** are more me, although I have a friend who has a new VW and it's a nice enough car. It has a vase for a flower on the dashboard.)
The VW and the Pickle.*** The Christmas tree is a German tradition after all. 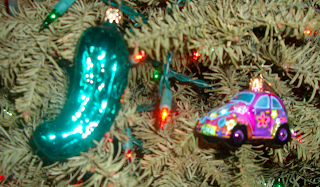 Froeliche Weihnachte
*The plot for which is pickling. Any child who ever lived remotely near Pittsburgh, home to Theresa Heinz, the Pirates, the Steelers, the Penguins (but with no team ever named the Pickles--maybe a debate team in my screenplay), got a field-trip to the Heinz 57 catsup and pickle factory. And came away with cute little larval-looking pickle pins. These petite plastic pickles were my son's, but I think, as a child, I got cute little tin ones. Next year, these go on my tree...should send to him, but he doesn't do a Christmas tree. But now I think, they might make nice earrings. For a pregnant woman. 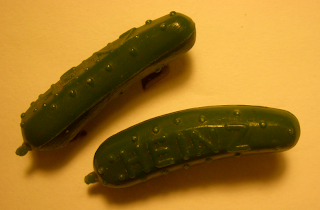 Pickle Larvae
**Speaking of which, I saw an old right-drive Morgan, dill-pickle green, in the parking lot at Starbuck's the other day. I walked around it, looking at the wooden dash, the tiny windscreen, the way Bob Dylan circled around Johnny Cash, and said "Yeah."
***Which also recalls to me an obscene limerick a friend and I concocted concerning a nun and pickle. Since she really deserves the copyright on it, I will not quote it here except to note the rhymes involving "dilly," the nun named Millie, whose affection for God was quite silly. It also involved jerkin' gherkins.
****Which is the name for some annoying insects which splatter on your windshield and radiator at a certain time in Florida; I had to scrub their remains off after that visit to Epcot in 1990-whatever.
Posted by baroness radon at 12:10 PM

Years ago, a friend and I went to Disney World. Much of Epcot Center (and Tomorrowland) felt hokey but I loved it for the food -- in particular, the Scandinavian and Morrocan fare available there. :)

I think Scandinavia wasn't there when I was. But ...did you buy a pickle??

Great - now *I* want a pickle ornament. Only to write dirty limericks.
(Also, VW Bugs sucks. I drove a new one -rental - when my car was wrecked into. They're crap. I hated it. Also, I thought the flower vase was a shot glass! Haha)