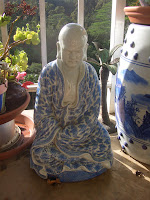 During my first serious retreat doing some Taoist meditation I was a little alarmed.
"We're practicing how to be dead," I thought to myself.
A silly thought. But not really too far off the mark.
Recently, in a brief dialogue among some bloggers about this very topic of meditation, someone said I should elaborate (I think that's what she meant) on my comments about my understanding of the "goal" of meditation.
I blog (which sounds like it comes from the same root as, say, "blah, " as in "blah, blah, blah") about the mundane yin and yang aspects of my daily life and observations thereof. I don't usually care to talk about these very deep, expansive things. So much literature is out there, my comments have far less significance than any other commentary on the Tao Te Ching or the I Ching.
But today, after arising from a delightful winter afternoon nap and then, a little sit in the sunshine on my lanai, I think, maybe I do have something to say about this.
Or at least quote (from Thomas Cleary's translation, Taoist Meditation):

In specific reference to the blog comments, there would be no kids doing the counting, no gorillas either.
Of course, I might be completely misinterpreting what the other bloggers were talking about.
And now I'm going back to the lanai, with the Yellow Emperor, who really gets it, where there is still some sun, to do some not-thinking.
Posted by baroness radon at 3:51 PM

Counting beans would make me stabby, not relaxed.
But I totally get your point. :)

I thought you were in accounting?
But bean counting is kind of a slur, right?

Sybil, I just added your blog to my list...right under the link to Song Il-guk. But don't get any funny ideas!

Well, thanks for the elaboration. I can understand you not wanting to write about meditation, as far as getting into the specific details of it on your blog, since it can be pretty personal, and also as you've mentioned there are already plenty of good books to consult that delve into the deeper aspects of it. So adding to it is probably not necessary, unless it's something that you really want to do.

As to the original post in question, even though Brandon summerized it pretty well, I think it would be worthwhile to watch the video:

A key to deciphering my previous comments:

Either way, it doesn't really matter. I sometimes leave silly comments after the midnight hour, especially if I've had a few beers.

Of course now I can't see that video without seeing the gorilla.
In fact it's hard to count the passes! (Like that other similar game: for the next three minutes, don't think about rabbits.)

I understand your left/right brain comments.

But actually, "neither counting nor gorilla" is exactly what I meant. The kind of meditation I'm attempting is beyond right and left brains. In Taoist terms, it is about "harmonizing energy and breath." No thoughts from either side of the brain. No thinking. No beans.

Let's have a beer!