I was forewarned. Or at least fore-informed to expect 70 percent performing arts, 30 percent shameless (but entertaining) promotion of Falun Dafa.
I was almost late for last night's performance of Shen Yun (ironically, because I was poking around in a bookstore looking for a particular translation of the I Ching), but made it on time to meet the Wizard in the lobby. And then the fun began.
As payback for enduring Wagner operas, I put in the Wizard's Christmas stocking (kinda pricey) tickets to this "inspirational" production about China's 5,000 years of civilization, stressing the "compassion and loyalty, kindness and bravery [that] lie at the heart of traditional Chinese culture."
I'm not sure everyone in the audience knew that Shen Yun (meaning something like divine style) is a performing arts troupe that is "associated" with the loose Falun Dafa empire and has a mission "to renew the true, divinely-inspired cultural heritage of China." In the eyes of the Chinese Communist Party, Falun Dafa and its founder register somewhere on the scale of fear between the Guomingdang and the Dalai Lama. Although, I think Li Hongzhi has a lot in common with Hong Xiuquan, the anti-Qing official who thought he was the brother of Jesus and instigated the Taiping Rebellion. And in a civilization with 5,000 years of history, that was like yesterday, and not easily forgotten by the new dynastic powers.
The show largely featured classical, folk and ethnic dance routines, pretty familiar to us; we've seen a lot of this done by local dance troupes and Chinese touring companies. Shen Yun, based in New York, is banned in the PRC, which may be why the annoying Western narrator pointed out that "You'll never see anything like this in China." In fact I saw things exactly like this in China, except for the stunning operatic Falun Dafa hymns and three acts which featured police beating up and killing Falun Dafa practitioners. In one, a practitioner is harassed and

killed when he tries to put up a banner in a public park in, was it Beijing? Shanghai? Hong Kong? I saw one of these banners in Hong Kong in 2008; the attacks aren't quite so blatant there, Hong Kong not quite under the total control of the Party yet. Although, recently a Shen Yun show had to be cancelled there because the "Hong Kong authorities" (read Beijing) would not issue some of the performers visas.
By the third of these counter-revolutionary-opera scenes, the audience was tittering...the police had a Keystone Cops quality about them, and the descending heavenly maidens were just too predictable as they revived the victim and took him off to a glittering palace (Heaven's Gate) in the sky. It reminded me that this was public relations (the Chinese invented propaganda), more than just promoting culture through dance, a little like calling the soup I enjoyed when I got home "vegetarian." I'd concocted it the night before with the few vegetables I could find in the fridge--some lightly stir-fried onion, carrots, mushrooms, and Shanghai bok choy. With some leftover cooked rice. All added to the broth from the remnants of a roasted chicken. 70 percent vegetables, 30 percent chicken broth. A dash of shoyu, and any Chinese peasant or prisoner would think it was great. 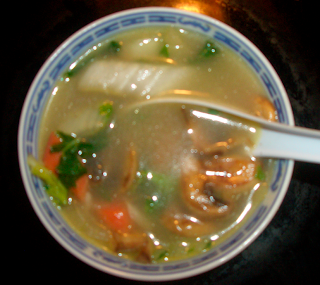 "Vegetarian" Soup is Good
Still, the 70 percent entertainment part of the program was just lovely. The dancers were lithe, flexible, strong and acrobatic. Costumes were colorful and matched the front-projection scenery. (In one of the blatant Fala Dafa persecution scenes, the backdrop was an idyllic Chinese villa in the mountains. "I could live there," I said to the Wizard. "No," he replied, "the feng shui is really bad, look how the stairs go up to the door.")
The show improved after opening with a bizarre dramatization of a creation myth and a hymn sung by a formidable soprano, called "Spreading True Words" (...Corrupt as the world is, the Dafa spreads...The followers of Dafa spread true words.) Acts included a tribute to the Qin terra cotta warriors, although the much more elaborate "5,000 years of..." show I saw in Hangzhou featured live horses in a battle scene with fire. The Monkey King and Pigsy had an interlude, and the Mongolian horsemen (sans horses) were really quite good. "Mischievous Monks" were cute, not exactly Shaolin-style, but heartwarming. A particularly lovely moment was "Plum Blossom," the ladies of the company dancing with fans that simulated the winter flowering, promising the arrival of spring. One of the fluttering fans came undone during the dance, but the dancers recovered with extreme grace. In fact, all of the ladies' dances reminded me of the dancers who entertain emperors in the historical dramas I like to watch.
Still I am a little conflicted. I love Chinese dance, and it was good. I am interested in Chinese spiritual practices, but I look to tradition, not a latter day -- dare I say -- cult. I have no doubt that the followers of Li Hongzhi's sometimes bizarre teachings are sincere, moral and high-minded, and who would argue that the CCP's harassment and fear of these folks is not despicable. But at the same time, Falun Dafa has become positioned as an adversary to the Chinese power structure, and we saw what happened at Tiananmen.
Earlier in the day, in the run-up of activities before Hu Jintao visits Washington, Hillary Clinton delivered a speech that suggests she understands very well the yin and yang of international politics. But according to The Epoch Times, a media arm of Falun Dafa, she was "suggesting that China get rid of the Communist Party. What an excellent idea!"
Who knew that this stage show would be connected to something so deeply political. Religion and politics, mixing it up again: Falun Dafa evangelism, despised by the Chinese government, with millions of followers, a prominent voice in the media and beautiful stage shows!
I just hope my interest in Chinese dance doesn't prevent me from getting a visa for my next trip to Wudang to study traditional Taoism. In any case, this performance will be remembered personally as a Chinese prelude to the western opera season which begins in just two weeks with Faust. Stay tuned.
*Shen Yun is okay, good/not good. Six of one, half a dozen of the other, an idiom a Chinese friend had difficulty understanding.
Posted by baroness radon at 8:01 AM