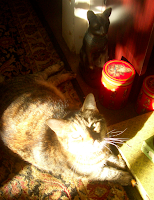 After a week--or maybe it was more, seemed like more--of rainy, cold, clammy unpredictable Hawaii winter weather, a warm dry sunny day.
The cats are positioning themselves in the small spots of sunshine coming through the windows. The clear skies encouraged a delightful outing to make a charity delivery of the TV made obsolete by the new one; to pick up a $165 money order reimbursement at the Post Office (for the UTTER FAIL of a guaranteed Express Mail delivery at Christmas to the 90-year-old patriarch); to down a pint or two or three at the Irish pub across the street from the other one that was closed where we would have had lunch if it had been open; and for a necessary grocery/pharmacy/Chinese kitchen run. Everyone on the island is in a superlative outgoing good mood. It's the sun, I'm sure. Each of these outing efforts is a story.
Getting rid of the old TV: We tried to give it to Goodwill, where I dropped off a couple bags of old clothes and such, but Goodwill does not accept "electric" things. The very nice man handling the intake said we could take it next door to Best Buy where they would "recycle" it. (I interpreted that as "throw it away.")
"Let's try the Salvation Army, downtown," I said to the Wizard. "And if they won't take it, IHS will." IHS is our local homeless sheltering organization. We donate cash regularly to both of these charities. Goodwill seems to have gone a bit upscale, reselling things to people just a little older or poorer than us. A few miles closer to town, we arrived at the Salvation Army donation spot. They were DELIGHTED to get the item, a perfectly decent relatively new working 19" color TV with a remote and the owner's manual.
Since we were downtown, I said, "Let's stop at Murphy's," our favorite Irish pub/restaurant.
"Just what I was thinking," said the Wizard. But when we got there, it was closed, not open until 4. It was 12:30. (Downtown Honolulu --unlike Waikiki--is kind of dead on Saturday afternoon.)
"Well, let's go over to O'Toole's," the other Irish pub across the street where the neon beer brand signs were on.
"Just what I was thinking," said the Wizard.
Claiming the money--A few pints later, we pulled out to go to the Post Office to collect a certified mailing of Postal Money Orders (sent from the Post Office) to reimburse the colossal Express Mail Fail. (This is a whole 'nother horrible story, better posted on the yin side, yet to be written.) Long lines near closing time at the neighborhood P.O., but when we finally got to the counter, retrieved the mail, and asked for payment on the money orders, Rudy the clerk couldn't have been nicer. His service and sunny manner completely exonerated the Post Office in my mind.
"You two have been together for a long time," he said, cheerfully handling our claim. It was a little ambiguous as to exactly who got the cash. We may have been the most interesting thing he had to deal with all day. He reminded me of a fabulous United Airlines ticket agent who put us together on a flight out of Hong Kong for which I had a business class seat and the Wizard had coach. How charmed I was when the Wizard came after boarding to sit with me in the upgraded section.
Healthy shopping--Then to the grocery. We got everything on the list and then some. Looking at his iPhone notepad, in (on?) which I had entered something. The Wizard asked, "What is cargaine?"
"Oh, that's coffee..I can't type that small. I was trying to type caffeine. Last time you got decaf. It was awful. We need real coffee."
On checkout, the next person in line lauded us on our "healthy" purchases. "But what about the gin," I said.
"Oh, but that has juniper! Berries! Healthy!"
Exactly what I say every time I shake up a classic Martini.**
And what could be better than a crisp Martini at sundown on a perfect sunny day? Which is what I think Sandra Bullock's character said in 28 Days, or something like.*
*"Yeah, I know I drink a lot, I know I do because I'm a writer and that's what I do, I drink. I'm not like those people out there, I can control myself! I can, if - that - if I wanted to, I could, if I wanted. I can! I can! "
**The Martini was invented as the first cocktail that mixed, completely contrary to conventional wisdom and common sense, wine and spirits (i.e., gin and vermouth.) No "wine", no Martini.
Posted by baroness radon at 5:04 PM

Sounds like you had a great day. Thanks for sharing it via your stories. :)

Re martinis: are only gin ones real to you or do you accept vodka martinis too? ;b

And I completely forgot to mention a search between pints into Chinatown to find a particular shop that sells a certain type of incense...which has closed. It was a Hong Kong kind of day.

And yes, I'm a purist (old fart) when it comes to Martinis. James Bond (in the books) actually didn't drink vodka martinis; he just added a little vodka for kick.

Can you still get that great cheap King Robert gin in HK? Maybe not the best for a "straight up with an olive," but just fine with tonic!

Thanks for reading. Next time I come to HK, maybe you can lead me on a hike.

And moreover, just because it's in a Martini glass doesn't make it a Martini.

Not that I wouldn't drink it!

Not a gin girl, here, but I do loves me some vodka.